Deprecated: Function create_function() is deprecated in /home/mygardeningnetwo/public_html/wp-content/plugins/like-box-widget/like-box-widget.php on line 196

Deprecated: The called constructor method for WP_Widget in like_box_widget_facbook is deprecated since version 4.3.0! Use __construct() instead. in /home/mygardeningnetwo/public_html/wp-includes/functions.php on line 4954
 Top Ten Diseases That Affect Lawns | My Gardening Network
1

Lawn diseases can create havoc to a good spread of lawn or cause unwanted expenses if not identified in time. Identifying lawn diseases is not easy and one has to rely on the color of the grass blades or the tell tale signs of wilting, mold, brown patches, rust or rot. Detection of lawn diseases in the earliest stages is helpful as it is easier to contain. If delayed, the entire patch of lawn might have to be uprooted and a fresh bed of lawn will have to be laid.

Here are some helpful tips of identifying lawn diseases. It may be helpful to note that most lawn diseases are caused by fungal attacks with are either water or air borne. 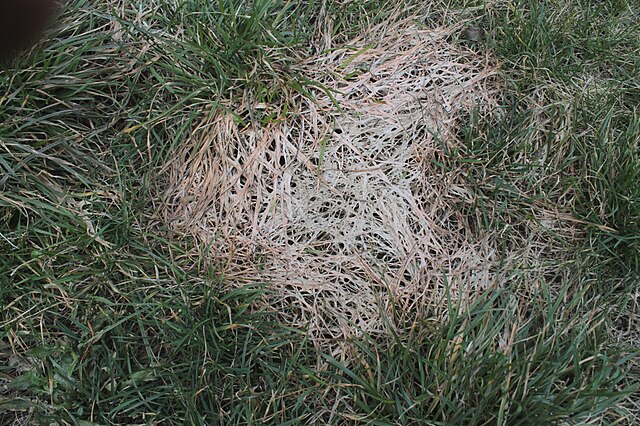 Rust is typically a orange-red or a orange-brown residue that forms on the under surface of leaves during the initial stages. It is a fast-spreading, air-borne disease caused by fungal spores. Rust happens when there is too much shade and also when the soil is not fertile enough. Caused by the rust fungus, rust is easy to treat by watering the lawn early in the morning and by removing shade as much as possible. A good organic fertilizer too to enrich the soil will boost rust prevention. Use an organic contact fungicide such as Neem extract to spray on leaves. As far as possible avoid inorganic fertilizers and fungicides as they can cause secondary reactions.

Lesions happen when parts of the plant are affected and die. It can happen at the root or stem of lawn grass, and is a symptom for many diseases such as blight.

Often seen as pythium blight, blight is easily misinterpreted as rust. However, blight is the discoloration of the leaf as a whole and not just a residue on the leaves. Grass leaves turn from green to yellow to brown and finally die. It begins as lesions and ends as wilt.

Wilt refers to the lithe and lifeless appearance of the leaf blades. It is an indication of poor nutrition of fungal attack, where the plant is being denied its nutrition. Wilt can be treated with proper soil aeration, watering and a fungicide.

This is seen by thread-like bands around clumps of grass. The bands or threads are red to pink in color are usually affect only the leaf blades. Proper nutrition with nitrogen rich fertilizer and using a fungicide will help control the spread of Red Thread disease.

This disease is caused by an excess of nitrogen in the soil and is indicated by the occurrence of lesions on the leaf blades. One of the main ways to prevent this is to aerate and water the soil well.

Powdery mildew shows signs of a white, powdery deposit on the leaf blades of lawn grass and is an indication of fungal disease. Spray with an organic fungicide like Bordeaux Mixture.

Slime-like or powdery white deposits on the leaves of lawn grass are an indication of slime mold. However the powdery substance resembles frost flakes more than mildew. Slime mold is generally not harmful, but a spray of fungicide will keep this under control while making the lawn have a healthy rich green lush.

This is a common lawn grass disease identified by the presence of rings. These rings make the leaves of the affected regions turn brown and most often accompanied by the growth of mushrooms around. Fairy rings can be prevented not by fungicides but by the use of fertilizers rich in nitrogen. Fertilizers restore the soil balance required for the plant which helps it regain its healthy growth.

Snow mold is caused by the impact of the winter and snow on the grass. Aeration of soil followed by top cleaning of debris from the lawn surface helps control the spread of Snow Mold. Use an organic fungicide.

As can be seen from the above list of symptoms or diseases affecting lawn grass, most are fungal in nature and can be contained or dealt with by using organic fertilizers or fungicides. Note that, while most are easy to deal with if identified early enough, do not hesitate to call in the experts who can save your lawn from any unwanted face-lift.