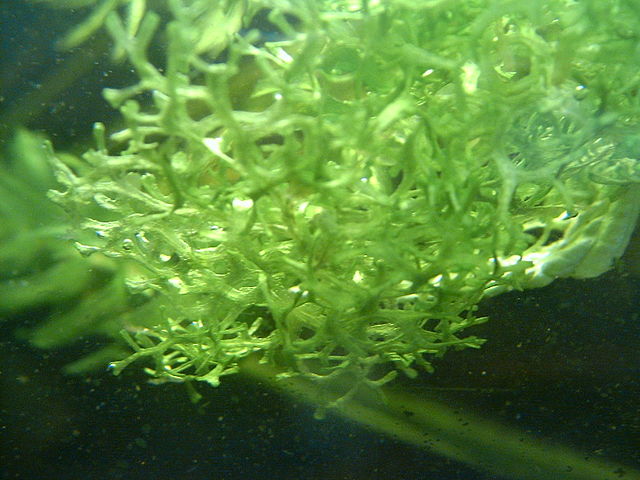 There are about 200 species of Riccia found all over the world, though predominantly in the southern hemisphere. They belong to the Division Bryophyta and Order Marchiantales. Most of them grow in wet terrestrial habitats and damp soil, while R. reticulata is xerophytic (desert species) and R. fluitans and R. natans are aquatic (free floating and submerged).

Plant body is a prostrate, flat, green, ribbon-shaped and dichotomously branched thallus. Branching determines the shape of the plant or plant cluster exhibited as circular, rosette, cruciform, reticulate or overlapping.

Rhizoids and scales are present on the ventral median ridge.

Rhizoids are numerous, unicellular, elongated, tubular and hair-like and are found as simple rhizoids or tuberculate rhizoids.
Scales are arranged in a transverse row and may be membranous, multicellular, single celled, and with colours ranging from pink, red, violet and black. Scales contain anthocyanin pigment and when in water absorbs chlorophyll making it look green.

Vertical C.S. of the thallus indicate tissue differentiation into an upper assimilatory region and a lower storage region.

a). The upper assimilatory region is photosynthetic. It consists of numerous unbranched photosynthetic filaments arranged in vertical rows with a single row of cells, ending in the upper epidermis.

Upper epidermis is discontinuous and has non-green cells. All other filament cells contain chloroplast which help manufacture food for the plant. Spaces between the filaments are called air spaces, air chambers, air canals or air channels. Air spaces may be compactly or loosely arranged.

b). The lower storage region is a continuation of the upper assimilatory region and is parenchymatous. Cells are wider, devoid of chloroplast and are compactly arranged without air spaces. They act as food storage cells. The lower part of the storage area is limited by the lower epidermis which are made up of small cells and give rise to the single celled rhizoids or multicellular scales. Rhizoids and scales serve as anchors for the plant. Rhizoids grow out from the mid section of the lower epidermis, while scales grow out from the margins.

Riccia reproduce extensively by sexual reproduction. Well defined and distinct sex organs are present. The male sex organ is the antheridium while the female sex organ is the archegonium. When male and female organs are present on the same thallus, they are said to be monoecious or homothallic, and when they are present on different thalli, they are said to be dioecious or heterothallic. Sex organs develop in acropetal succession, ie. newer organs are formed at the apical lobe while older ones are pushed behind. Sex organs lie embedded in the mid dorsal section of the thallus between air spaces and filaments.

Amanda writes about botany and plants from the deserts of Oman where summer temperatures climb to 130 Fahrenheit. Amanda has a BSc in Botany and is a co-author of Encyclopedia of Cultivated Plants: From Acacia to Zinnia. Read more articles by Amanda.