The English Oak is so much a part of the English countryside that some of them become quite famous; famous enough to be given names and protection. One such tree is estimated to be 1000 years old in Lincolnshire, England, and is named the Bowthorpe Oak. It is practically treated as royalty.

Though the English Oak had been brought to North America by English colonists back in the seventeenth century they have not overwhelmed the forests in the United States and only small sections can be said to have English Oaks “escaped” into the wild. Pity, as they are an extraordinary and majestic tree.

In Canada and the Northern United States, English Oaks have been widely planted due to its beauty and, to a lesser extent, its cold hardiness. It can live happily in USDA zones 5-8, but some manage to survive in zone #3. Some mature trees have been known to be killed by a particularly cold winter freeze. Its preferred zone is 5-6 where it typically grows about a foot per year. 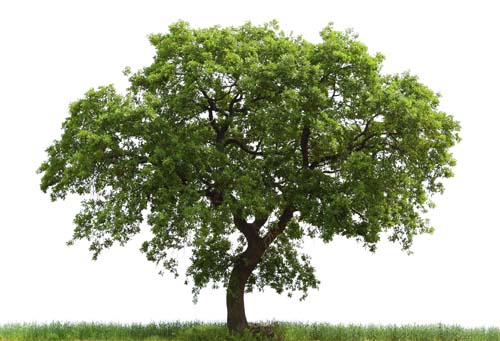 The English Oak can get to be 140 feet in height and has a rounded canopy spreading to 80 plus feet wide when given the room. It tends to be a bit smaller in cultivation, but still quite huge. It is therefore not suited to the typical suburban yard. The bark is rough and a greyish brown color with deep vertical groves running the length. The roots go deep with none of them breaking the surface as often happens with large trees. This is good for those who crave a smooth lawn underneath trees. This tree likes wet and heavy soil either acidic or alkaline. Any lengthy drought will likely do it harm. It likes full sun, but will not do well in the hot, dry summers of the middle and southwestern United States and in the humid southeast the fungus powdery mildew can be a problem.

The leaves of the English Oak emerge a bright green which darken to a deep green as the summer progresses. They are 3-5 inches in length with 3-7 pairs of rounded lobes. The leaf stems or petioles are very short. The leaves, growing in clusters of 5-7 leaves form a circular pattern rather like the petals of a flower, overlapping slightly. As with most Oaks, the leaves of the English Oak don’t make much of an autumn show, and most of them don’t drop at all, staying stubbornly on the tree long after all other deciduous trees have tossed their foliage to the ground. Oak leaves often can be heard rustling in the winter wind almost until spring.

The flowers of the English oak tree are insignificant, 2-3 inch long, drooping catkins the same shade of early spring green, or slightly chartreuse, which makes them virtually invisible from a distance. Come summer, on trees older than 7 years of age, elongated acorns emerge about an inch long with a scaly cap which covers one third of the nut. These form in clusters of 2-5 at the end of 2- 4 inch long peduncles. When these acorns fall from the tree, if the chipmunks and squirrels don’t get them first and if the ground is suitably moist, they will almost immediately sprout and send a long tap root down into the ground to over-winter until the next spring when they send a shoot upwards to start a whole new generation of trees.

The cultivar “Fastigiata” an upright English Oak, growing in a narrow, conical shape is used in the landscape as a substitute for the short-lived Lombardy Poplar. The “Pendula” cultivar has a weeping form, “Nigra” has purplish leaves and “Variegata” predictably, has a white margin on the foliage. All of these make excellent specimen trees.

For the expansive landscape, the large public garden, the arboretum or a rather large homestead the English Oak would make a marvelous addition and possibly could still be around well over a century after we’re all long gone. That’s something to think about when wishing to plant a legacy and not merely a tree.

Glory writes about flower gardening and other gardening subjects in addition to her serial romance novels from the Pocono Mountains of Pennsylvania, USDA Gardening Zone 5b