How to Kill Leylandii (Cupressus leylandii)

The Leyland cypress (also called leylandii) is a fast-growing coniferous tree. It can grow to a height of 15 meters, and is commonly used for enhancing a home’s privacy.

However, owning leylandii can also cause disputes with neighbors, whose properties may be overshadowed by the plant. For that, many people want it killed. If you are one of them, here are ways on how to kill leylandii.

The way to do this is to leave a stump by cutting the trunk and then killing the stump by digging around the roots and slinging caustic soda into that part.

Move to the other side. Cut downwards until the end of the first cut is met. Step away to safety.

Note: Have you heard of root “rotters”? Check them out on the internet and read reviews about them. Get one of these products. Cut the tree to about 2 inches. Make loads of holes on the stump and fill them with the “rotter”.

Using methods without chopping it down

If not cutting the leylandii is paramount, do one of these ways. Do two or three of these if using one method at a time didn’t accomplish the goal. 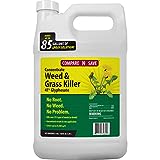 Do the same method explained above. However, you may just drill holes on the roots rather than the trunk. Some school teachers can give copper sulfate for free.

Look for the chemical in garden centers. Remember: It is SODIUM chlorate. There’s also another chemical called POTASSIUM chlorate used for terroristic acts. You’re not going to buy that unless you want the tree blown up.

The instruction is to cut a 2-inch strip around the trunk, making a full circle. Drive copper spikes going around. This ensures no re-growth as those whose who have done this swear.

The final option you have is to dig the tree out of the ground. Purchase a mattock. It looks like a pick axe and is excellent for cutting the roots of a tree near its trunk.

This requires a lot of hard work, but this one can give the best results by a mile. If you choose this approach, cut the trunk first.

The remaining part should be about 5 feet tall. That kind of height will give you a lot of leverage for the part where you will uproot the whole thing.

If this move to cut your leylandii is out of a dispute with your neighbors, you probably need to refer to the law covering keeping this tree. It’s beautiful alright, but it can truly be a nuisance.

The law says it should be less than 2 meters high, but even if your tree has already reached that height, there are other bases for complaints.

For example, the tree bars light. Also, the tree is affecting enjoyment of the complainant’s property. Keep talking to your neighbors until they agree to a more acceptable resolution, like thinning the tree instead.