When to Pick Sweet Banana Peppers?

When Do You Know If a Banana Pepper Is Ripe?

The pepper changes colors as it becomes ripe.

It can be picked anytime between it becomes yellow, to when it reaches red. When the pepper reaches these colors, they are perfect if you want to pick sweet banana peppers.

The taste of this pepper depends on when it is picked. Usually, banana peppers taste mildly tangy and it is part of the pepper family that can even have no spiciness at all. Its taste is quite similar to the taste of green peppers, with a distinct sweetness that separates them from each other. 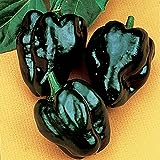 What to Watch Out for:

Waiting for the Peppers to Ripen

This is important if you want to pick sweet banana peppers and not rotten ones. Waiting for too long is a bad idea when harvesting sweet banana peppers. The peppers may start to rot while still on the plant. Therefore, you must be watchful for any discoloration and check to see if parts of the pepper are soft. A banana pepper with soft texture is an indication if it starting to rot.

The Size of the Peppers

The length of a fully grown banana pepper ranges from 4 to 8 inches. Be sure that the peppers you are harvesting are completely grown before proceeding to harvest them.

How to Remove Them from the Branches

Leave a spacing of a quarter of an inch, to half an inch of stem attached to the pepper. This will ensure that the banana pepper will not spoil quickly because there will be no open cut or bruise from where the stem would have been taken off.

Do not exert too much force in holding the pepper or the branch when picking. This may cause a bruise on the plant and lead to quicker rotting or spoiling.

The Tools to Be Used When Harvesting

Always use scissors, shears or a cutting knife when taking the peppers off of the branches. Sharp gardening tools will always be best for harvesting banana peppers. This will make sure that the cut is clean and straight, therefore protecting the plant from damage or disease.

The more often you harvest from the plant, the more often it will reproduce. Overall, the most important thing is to be careful when harvesting a banana pepper plant. This is to ensure that the plant would not be damaged and still continues to bear fruit, and that you can pick sweet banana peppers more in the future.